As usual screenings will take place in Sheet Village Hall where you can also enjoy a drink from the bar and if you fancy a bite to eat, you can order food when you arrive, to be delivered from the Queen’s head at the interval.  Film nights are always enjoyable sociable events where you can meet up with friends and make new ones too. The programme includes a wide range of films old and new from around the world. Come along and see for yourself. You can become a member or pay on the door. You will be made very welcome.

We have a steady annual membership of around 40 people and we are very grateful for their continued support. If you would like to join the club you can find details of membership options and the programme of forthcoming films on www.webcollect.org.uk/sheetfilms  and a link to the Facebook page.  You can also pay on the door at each film.  On OCTOBER 2021 – Film Club resumed

FEBRUARY 2022:  HUNT FOR THE WILDERPEOPLE

DECEMBER 2021:  A STAR IS BORN – Cancelled due to Omicron

Sunshine on Leith  is a jubilant, heartfelt musical about the power of home, the hearth, family and love. The film follows the stories of Davy and Ally, who have to re-learn how to live life in Edinburgh after coming home from serving in Afghanistan. Both struggle to learn to live a life outside the army and to deal with the everyday struggles of family, jobs and relationships. It is the tale of one tight-knit family, and the three couples bound to it, as they experience the joys and heartache that punctuate all relationships. And they do it all while singing to the euphoric music of The Proclaimers.

The film received overwhelmingly positive reviews. Writing a four star review in The Observer, Mark Kermode said “I shed a tear within the first 10 minutes, and spent the rest of the movie beaming like a gibbering, love-struck fool”

Into the Wild is a 2007 American biographical drama survival film written, co-produced, and directed by Sean Penn. It is an adaptation of Jon Krakauer’s 1996 non-fiction book of the same name, based on the travels of Christopher McCandless across North America and his life spent in the Alaskan wilderness in the early 1990s. The film stars Emile Hirsch as McCandless, and Marcia Gay Harden and William Hurt as his parents, and features Jena Malone, Catherine Keener, Vince Vaughn, Kristen Stewart, and Hal Holbrook.

Christopher McCandless,  son of wealthy parents, graduates from Emory University as a top student and athlete. However, instead of embarking on a prestigious and profitable career, he chooses to give his savings to charity, rid himself of his possessions, and set out on a journey to the Alaskan wilderness.

The film premiered during the 2007 Rome Film Fest and was later nominated for two Golden Globes and won the award for Best Original Song: “Guaranteed” by Eddie Vedder. It was also nominated for two Academy Awards, namely Best Editing and Hal Holbrook for Best Supporting Actor. www.webcollect.org.uk/sheetfilms

‘Days of Heaven‘ at 7.30pm on Thursday 21st April in the Village Hall.  Bar opens 7.00pm and as usual interval food is available to order from the Queens Head.  Staring Richard Gere, Brooke Adams and Linda Manz, Terrence Malick’s 1978 movie Days of Heaven was never a huge hit, but it was such a departure and so deliberate an attempt to have the audience stirred by beauty that it felt calming and inspiring.

‘Two Days, one Night’ at 7.30pm on Thursday 10th March in the Village Hall.  Bar opens at 7.00pm.  A thought provoking and perceptive French film.  Sandra (Marion Cotillard) has just been released from the hospital to find that she no longer has a job. According to management, the only way Sandra can hope to regain her position at the factory is to convince her co-workers to sacrifice their much-needed yearly bonuses. To read more about the film see Upcoming Events at  www.webcollect.org.uk/sheetfilms

‘Nebraska’ on Thursday 11th February 2016 at 7.30pm in the Village Hall. Bar opens 7.00pm. Nebraska is a 2013 American black and white comedy-drama film directed by Alexander Payne and written by Bob Nelson, staring Bruce Dern.  The film was nominated for the Palme d’Or at the 2013 Cannes Film Festival where Bruce Dern won the Best Actor Award.  It was also nominated for six Academy Awards.

Nebraska is a father and son road trip, from Billings, Montana to Lincoln, Nebraska that gets waylaid at a small town where the father grew up and has scores to settle. Told with deadpan humor and a unique visual style, it’s ultimately the story of a son trying to get through to a father he doesn’t understand. 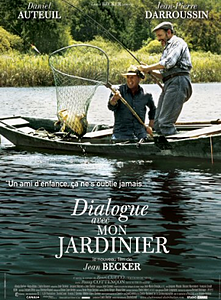 ‘A successful artist, weary of Parisian life and on the verge of divorce, returns to the country to live in his childhood house. He needs someone to make a real vegetable garden again out of the wilderness it has become. The gardener happens to be a former schoolfriend. A warm, fruitful conversation starts between the two men…’

Do come and join us to see this romantic and visually exciting film.  All are welcome whether members or not (£6 on the door). The bar opens at 7pm and food can be ordered on arrival for delivery from ‘The Queens Head’ in time for the interval.

“A Man and a Woman” (Un homme et une femme) – 1966, stars Anouk Aimée and Jean-Louis Trintignant. Directed by Claude Lelouch,  this film became one of the best-loved French films of the 1960s, and won not only a Cannes Golden Palm but an Oscar for Best Foreign Film. This is a simple, but brilliantly-told, love story of a second-chance romance, with a hauntingly beautiful music score. The action moves from Deauville to Monte Carlo. Jean-Louis Duroc (Trintignant) and Anne Gauthier (Aimée) meet incidentally at the boarding school where they visit their children each weekend. He visits his son, she her daughter. She misses her train and he offers her ride back to Paris in his car…

In addition to the normal Thursday evening film night, there will be a special matinee screening of “Amelie” (15) in Sheet Village Hall on Sunday 1st November (doors open at 2.00 pm) . This special event is sponsored  by “Cinema for All”  as part of the British Film Institute “Love” season. This will be an opportunity for those unable to attend our regular evening screenings to enjoy the “Sheet Film Club experience”. Tickets for this event will be available on the door and it is open to both members and non-members.

‘The Secret of Santa Vittoria’ starring Anthony Quinn on Thursday 12th November at 7.30pm.  Non-members pay £6 on the door.

‘Paddington’, a film for all the family on Friday 20th November at 6pm.  Children £4 must be accompanied by an adult.  Ticket price for under 16’s includes pizza and a soft drink at the interval.

The second film in the Film Club’s new 2015/2016 season is “Woman in Gold” starring Helen Mirren and takes place at Sheet Village Hall next Thursday, 15th October. Doors and bar open from 7.00 pm. As usual, interval food supplied by the Queens Head, can be reserved on your arrival at  the door.

For more details of the Film Club’s full programme go to: www.webcollect.org.uk/sheetfilms.

This site uses Akismet to reduce spam. Learn how your comment data is processed.